No Darwin, but Dyer excited as winter looms 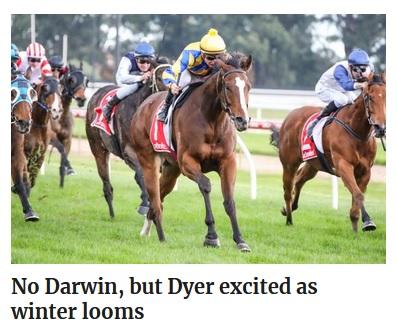 No Darwin but Dyer excited as winter looms

WINTER will look much different than it has for the past 12 years for Neil Dyer. The Kyneton trainer has been a staple at the Darwin Cup Carnival since the late 2000s, where he has enjoyed amazing success. But barring something remarkable, he won't be there this year - not that the carnival is any certainty of going ahead in its usual form due to the coronavirus. Dyer is naturally disappointed, as much for the Darwin Turf Club as for himself.

"It kind of reared its head a long way out - the COVID stuff started and they started closing up the Northern Territory, so I started thinking about it then," said Dyer, who has won a trio of Darwin Cups with Hawks Bay in 2011-12 and Royal Request in 2017.

"I'm quite prepared for it now though.

"At this stage, unless someone turns up with a Darwin Cup horse for me, I'm staying home.

"As it is, the horse can go up, but I have to stay here and we put the horse in the care of another trainer. You would have to isolate for 14 days when you got up there.

"I've been there 12 years in a row, it's disappointing, but I've got a few things to do around home. This is a good opportunity to do them."

Rather than dwelling on the negatives, Dyer, who has won all of the top end's major races, including the Darwin Guineas and Northern Territory Derby, believes his staying home might in fact be a godsend.

"The Darwin Cup has been great for me, but it has kind of stopped my momentum my down here," he said.

"I want to get cracking again and at least get 10 or 12 winners a year down here, which is what you need to do if you are going to live here.

By the looks of it, his perseverance, diligence and attention to detail have paid off following the recent acquisition of the former Western Australian galloper Metro Boy. The four-year-old gelding, and winner of three of 18 starts back in his home state, galloped to an eye-catching victory on debut for the Dyer stable in a $31,500 benchmark 64 event at Moe last week.

Full story with more about Latest Bentley and photos at the Bendigo Advertiser: